Why the Traditional Latin Mass?

What is the Traditional Latin Mass?

This is the Mass before the Second Vatican Council. The Novus Ordo Missae or the New Order of the Mass was put in place in 1969 by Pope Paul the 6th. The Traditional Latin Mass, TLM, Tridentine Mass, or Latin Rite, was the Mass for 2,000 years before this change.

Over the course of those 2,000 years when the TLM led the Church in all Her glory, there was of course organic change to the liturgy. None of the changes however were drastic, and none conflicted with doctrine. The Mass remained the same Mass Jesus gave the Apostles. The Roman Rite was and is the Mass of the Universal Church.

If you feel called to learn more about the changes to the Mass during the Second Vatican Council and beyond, I highly encourage you to watch Mass of the Ages Episode 2. This film takes a ton of history and breaks it down quite simply. Please, watch it!

Isn’t the Novus Ordo Mass Just the TLM in Your Own Language?

NO! There are so many changes it hurts! It also leaves room for much interpretation, and future changes as well. I often wonder before the Liturgy of the Eucharist, and even before the Consecration, would our great Saints even recognize the Novus Ordo? It is such a beautiful consolation to me to know that I look up at the same moon that lit the sky as The Holy Family fled to Egypt.

Did St. Margaret Mary, St. Joan of Arc, St. Thomas Aquinas, St. Augustine…did they look up at this same moon. I would guess yes! I see the same sun in the same sky that shone on Our Lord Jesus Christ! We can make the same pilgrimages as our sainted brothers and sisters. Our Holy Sites, can be touched, kissed, and prayed at in union with those who lives hundreds and thousands of years before us.

If there is beauty, power, and unity in human beings living in different generations in the physical reality of the earth and sky, how much more beauty power and unity is there in the spiritual reality of participating in the same Mass worshiping the God of the Universe.

The Differences Between the Novus Ordo and the TLM

There are those far smarter and informed on Church History, and the Mass then I, but from the little I know here are some of the huge differences dividing the Novus Ordo (NO) from the Tridentine Mass (TLM).

1 – Ad Oreintem: In the TLM everyone faces East (where the Holy Land is, where the sun rises, and where Jesus will return)! Everyone faces towards Jesus. The Priest is the captain of the ship and he is leading us to Jesus.

2 – The High Altar: A TLM has a high altar. This is raised three steps up from the ground, and on the eastern wall of the Church. A NO Mass uses a table in the middle of the sanctuary in order for the priest to face the people.

3- Latin: The entire TLM is said in Latin. The NO is always said in the language of the people. This is a tough one for a lot of people. Why Latin? Latin is the official language of the church, the devil hates Latin, and it is a language that is set apart.

4- Chant: The music of a TLM is sacred, made up of Gregorian Chant. The NO uses a variety of different music styles often merging the sound of secular music with the sacred.

5- Altar Servers: In the TLM they are boys only. The NO allowed for girls to enter in. The purpose of serving the altar was to prepare boys for the priesthood. It seems strange to ask girls to serve the altar which prepares them for the priesthood, considering girls cannot (and should not) serve as priests.

6- The People: In the TLM the people are there to worship God. They are there to honor the Lord, and the priest is the leader. He distributes Holy Communion and he preforms the readings. This is important as it makes his authority clear. We are not equal to the priest in our roles. In the NO lay people often distribute Holy Communion, bring up the gifts, and are lectors. There is a switch from a stronger internal participation in the TLM to a stronger external participation in the NO.

7- Receiving Communion: NO Masses allow all to touch the Host. However, the TLM requires everyone to receives at the Altar Rail kneeling, on the tongue. Lay people do not touch the Eucharist. This is consistent with belief in the Real Presence. The Eucharist is Our Lord, Body, Blood, Soul, and Divinity. He should be treated as a King, held by pure and consecrated hands, and given to the people in a way that diminishes the chances of The Bread of Life falling to the floor, crumbs being left behind on the hand, and possibly being taken out of the church and abused in a sacrilegious act.

8- Altar Rails: The TLM distinguishes the sanctuary from the rest of the Church. The NO eliminates this visual distinction. This sanctuary works a reference to the Holy of Holies in the Old Testament.

9- More prayers, more genuflects, more kissing of the Altar: The NO removed a shocking number of prayers like the Sign of the Cross, the times the Priest genuflects before the Tabernacle, and how often he kisses the altar.

10- Head Veils: In the TLM women cover their hair with a veil. Veiling or covering what is special, such as the Altar and the Tabernacle is common in Traditional Churches. In the same regard women, who veil their hair are special. Also paying mind to modesty, in 1 Corinthians 11:5 and 11:10 DRB we read,

“But every woman praying or prophesying with her head uncovered puts her own head to shame; for it is one and the same as a shaved [woman].” and “Therefore ought the woman to have authority on her head, on account of the angels.”

Veiling is a beautiful rich tradition that brings us closer to Mother Mary and helps us recognize our role as Catholic wives a mothers!

11- The Calendar: As if the disunity in the Liturgy was not enough, a ton of feast days were moved around creating two different church calendars!

12- The Eucharistic Prayer:  The Roman Canon is used in the TLM with minor changes made to it, never changing substance. After Vatican 2 there have been two new Eucharistic Prayers added which the Extraordinary form will not use.

How the TLM Benefits Your Children

The TLM with all its beauty and order, appeals to the spiritual and the physical. The Mass meets the needs of the masculine and the feminine, and it it properly ordered without confusion. These details add up, and create consistency and clarity for those who attend. This is important, as our children can see a difference in the dress, disposition, and overall reverence. They can see the vestments, the Incense, the Holy Water, all under the authority of the priest who is the Alter Christus leading us to Heaven, praying for us, feeding us. Another benefit, there are tons of large joyful families at the TLM’s! Yay!

So, Why The Traditional Latin Mass?

When in doubt, refer to antiquity. The Mass of the Ages, the Mass of the Apostle’s. The Mass that gave us great saints! This is where I want my family to be. Surrounded by symbolism that is oriented toward God and His Glory at every turn. You do not need to understand fully what is happening. To think we could ever understand the Mass fully this side of Heaven in any language would be silly! This short post is just a start of why the TLM is home for Catholics.

Have you or will you attend a TLM? Let us know in the comments below! Don’t forget to check out Mass of the Ages! 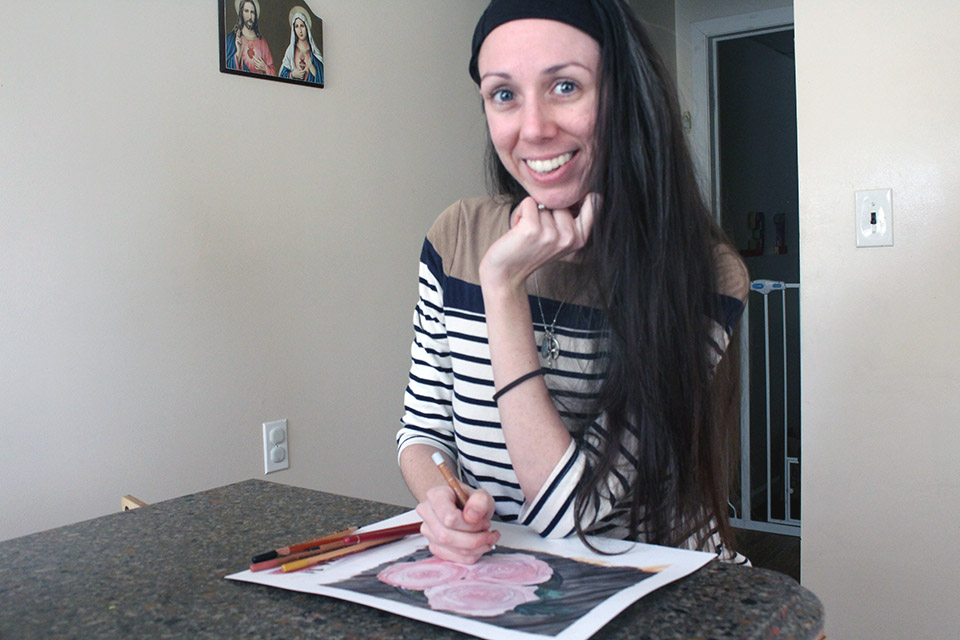 I am so happy you are here! Join us as we celebrate Traditional Catholiscism, home making and educating, and wife and motherhood.

Join our community of to receive recipes, handmade projects, and catholic wife and motherhood posts straight to your e-mail!